In previous posts, I noted that conditionality and placeholders are the foundations of single-sourcing but described them being used in single projects. What if you need to use the same elements in multiple projects? For example, if you want all projects from different authors to use the same product_name variable? 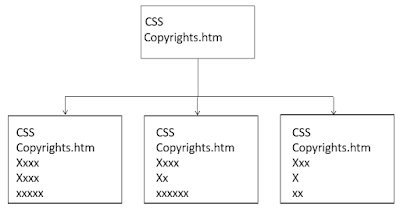 You decide that all projects must use the same CSS and Copyrights topic. So, you create a master project, the top box in the flowchart, and store the CSS and Copyrights topic there. (You could use any project as the master. However, that project may contain files that don’t apply in this scenario and are just clutter. It’s usually less messy to create a new project whose only purpose is to serve as the master.)

The beauty of this feature is that it ensures consistency across the projects in which it’s used. You no longer have to worry about the authors of the child projects changing the color of the h1 style in the CSS or changing the wording in the Copyrights topic; the next time they generate their output, their changes will be overwritten by the official version of the file in the master project.

Better still, this applies to any file in a Flare project. You get invisible consistency across multiple projects. I consider this one of Flare’s coolest features and yet one of its least well-known because, unless you took a class or called in a consultant, you’d never know that the feature even existed. And the name, Flare Project Import, doesn’t really say what the feature does.

A few tips if you want to use the Flare Project Import feature:
•       Create a separate master project and name it “Master Project” to avoid confusion. You can use any project as the master project, but this has two problems. First, using a real project as the master means that there will be a lot of files that have no use in the master/child model and are just clutter and potentially confusing.
•       Document the feature to avoid creating “zombie” projects. The term comes from an old client who asked me to investigate why the CSSs in his group’s Flare projects kept reverting to some standard format even though the authors were deliberately modifying their CSSs. As the client said, it was as if the CSSs had become zombies. The problem was that a year earlier, an author had set up the Flare Project Import feature but didn’t document it, then left the company. So the feature was working perfectly but no one knew why or what to do about it. Avoid this problem, and spare yourself the need to call in a consultant, by documenting the project.

That’s it for Flare Project Import. Next up – conditionalized styles and CSS variables.

Another Flare feature that supports single-sourcing is placeholders, which Flare offers in two forms – variables and snippets. Placeholders let you insert the same content in multiple places in a project, such as multiple topics, and automatically change that content everywhere with just a few mouse clicks.

For example (from the introductory post), let’s say that you’re documenting a new product whose pre-release code name is Longhorn. You write the word “Longhorn” in hundreds of places throughout the documentation.

Then, just before release, Marketing changes the product’s name to Vista. You now have to search the documentation for all instances of “Longhorn” and change them to “Vista”. It’s easy – just do a search and replace.

Or, let’s say that you have to repeat the same set of steps in multiple topics. Easy – type the steps once, then copy them and insert them in the appropriate topics. But what happens when one of the steps changes? You have to find each insertion and change it. But how do you know where you inserted the material. You might keep track of the insertions but that calls for an unusual level of management. You could again search for the insertions but that might again bring up false hits. Placeholders are a solution in both cases.

The simplest placeholder is the text-only variable. In the first example, rather than typing the product’s name over and over again, you’d create a variable called, perhaps, productname, and set its definition (its value) as “Longhorn”. You’d then tell Flare to insert the value of the productname variable wherever you wanted the word “Longhorn” to appear in a topic or other file.

Then, when Marketing changes the product name, you’d simply change the value of productname from “Longhorn” to “Vista”. Flare then automatically changes the “wording” everywhere you inserted the variable. You don’t have to keep track of the insertions – Flare does that.

Variables are easy to create and use. What can be tricky is defining them. For example, what do you do if you need to use a variable as a possessive – if you want to say “Longorn’s features include…” Do you create two variables called productname and productname_possessive with values of Longhorn and Longhorn’s, or do you use the single productname variable and type “’s features include…” and insert the productname variable in front of the “’s”? Either approach works; you just have to define which approach to use and get all authors to agree.

Snippets are similar to variables but more powerful because they can contain anything you’d enter in a topic – text, lists, images, tables, links, formatting, and so on – including variables. In example two above, rather than typing the steps, copying them, and pasting them into the appropriate topics, you’d create a snippet called, for example, task1_steps. You’d then insert the task1_steps into the appropriate topics. When the time came to change one of the steps, you’d change it in the snippet itself. Flare would then automatically change the “wording” everywhere that you inserted the snippet. Again, you don’t have to keep track of the insertions – Flare does.

Each snippet exists in a separate flsnp file that’s accessible from the Resources folder on the Content Explorer. (You can put the snippet files anywhere you want within the project’s structure. I just find it simplest to store them in the Resources folder.)


As with conditions, common problems with placeholders are in design and management. We often give placeholders names that are not clear. The result? Other authors using the same set of variables or snippets won’t find what they’re looking for and wind up creating duplicates, which complicates project management. A related problem lies in not documenting the rules and logic to use if an author really does need to create a new variable or snippet. As with conditions, when you leave and a new author comes on the project, they may send the project off the rails because the lack of documentation makes it easy to make mistakes.

That’s it for placeholders. Next up – Flare Project Import, one of Flare’s coolest and least-known features.